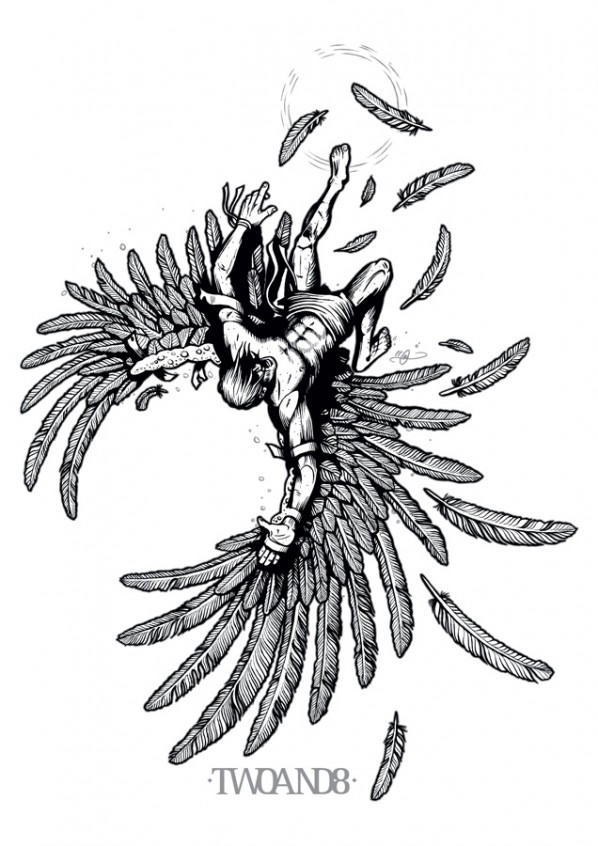 As a kid, I read a lot of mythology. Greek, Egyptian, Norse, it didn’t matter. The heroism found in these fantastic stories of gods, men and monsters, resonated with me. They showed through analogy and metaphor the best me that could be.

So, I was familiar with the story of Icarus, which if you’re not involved Icarus, his father Daedalus and the king of Minos. Icarus and his father were prisoners of the king on the island of Crete. To escape, Daedalus, a famous inventor, fashioned two pair of wings made from feathers affixed to a light wooden frame with wax.

As the two took off from their island prison and made their way back home to the mainland, Daedalus warned his son not to fly too high. The heat from the sun would melt the wax.

But Icarus, wasn’t listening. So enchanted with this new power of flight he flew ever higher until, true to his father’s warning, the sun began to melt the wax that held his fragile wings together. Before his own horrified eyes his wings disintegrated and he plunged to his death in the Mediterranean.

Seth Godin’s latest book, The Icarus Deception, is a furthering of his ongoing quest to clue us all in to the true nature of this “new economy,” what he terms the Connection Economy.

The main commodity of this new economy is art and it’s currency, human connections. No longer is the old Industrial model effective. The ability to join the market place with a newer more efficient way to produce and market a widget just doesn’t play anymore. The market is already glutted with newer, cheaper, more efficient widgets. What it it lacks is human interaction.

In a world where Good is overly abundant, where any of a dozen equally effective, equally low priced goods exist, what can set you apart?

At seven years old I wanted to grow up to be a jockey. When I told my mother, she laughed and told me it would never be. Already, at the age of seven, I was pushing the size and weight limit for most successful jockeys.  So, a bit dismayed I looked for something else.

Space was still a big deal in the late seventies so I decided next that I wanted to be an astronaut. That one was prematurely cut short as well as my mother informed me that most likely I’d be too big for that, too.

As time went on I found I had a knack for drawing. Over the years I spent a lot of time on it and developed it into somewhat of a talent. By high school, when it’s time to really start thinking careers in earnest, art was at the top of my list. Cartooning, graphic design, illustration and “fine art” all rattled around in my head as possibilities.

Foolishly, I listened. I stayed away from the sun and did my best not to fly too high.

The deception of The Icarus Deception is that we leave out the part of the myth where Daedalus warns his son not to fly too low. Flying too low your wings become heavy, they can get saturated and you can be dragged down by the waves. For many years, that’s just what I did.

I gave up drawing, it had lost all pleasure for me and I stuck to the world of “safe.” I shot below my abilities for the sake of security and inside I began to rot and fester, my own power and energy turning in on itself.

Seth defines art a little differently from the rest of us. It’s not just something you hang on the wall or go watch. Art is the connection that takes place between you and whatever it is that evokes that connection. In this light, customer service can become art, as can baking, carpentry, html code and personal training.

As a gym owner and personal trainer what sets me apart? There are a million good trainers out there and no shortage of facilities that offer comparable goods and services to what I have. My programming and methodologies are all available on the Internet for free, that’s where I got them.

So what sets me apart?

Nobody cares about what happens in my gym the way I do. If your goals resonate with my vision and message then I can guarantee you an optimal experience, far greater than what you’ll find anywhere else. If they don’t then I’m going to do my best to find you place where they do. It’s a disservice to us both to do anything otherwise.

Seth’s book reminded me I’ve already regained my art.  Too often we mistake the medium — paint, film, performance art —  for art when it’s really how that medium affects, or rather, that the medium affects us that makes it art.

And this art I intend to make fly.  Yes, there are limits and yes, you can exceed those limits, but the sun is really far away and you can fly much higher than you think.

To our perfect imperfection,

P.S. If you’d like to pick up your own copy of the Icarus Deception.  You can order one from Amazon here: